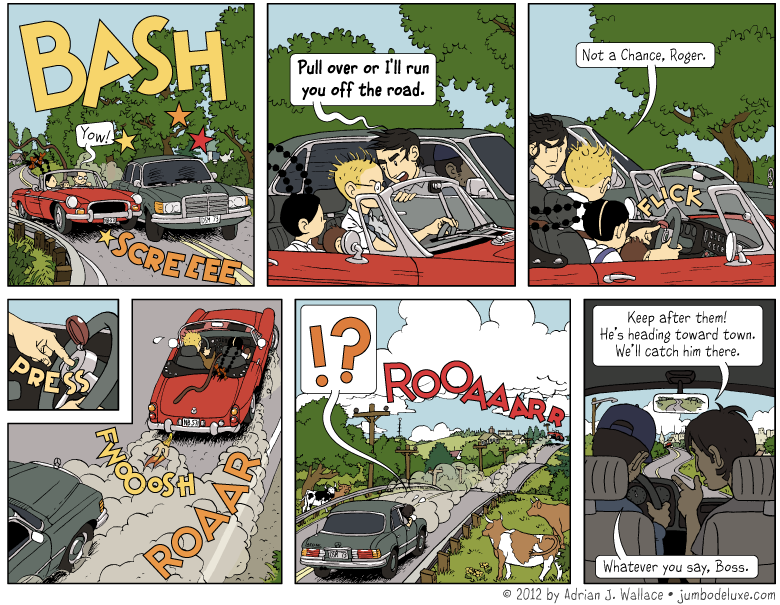 Not a Chance, Roger

We’ll be back soon

It seems my webcomic has drifted around in hiatus-land for a while. It was not my intention to go this long without an update, but I’ve had a flurry of work (not all of it comics-related) enough to keep me away from my comic-making here.

One of my recent projects was illustrating an educational comic book written by a good friend of mine. The drawing style was very similar to Jumbo deLuxe comics, so I’ll be sharing more details on this when it becomes available. Emily, Nathan and their friends did not appear in that one (unless you look very carefully) but I still think it will be a lot of fun. Plus you might learn something too.

I’d like to assure you, dear readers, that I intend to work on more Jumbo deLuxe comics again, but I don’t have a clear idea when this might be. It all depends on my current workload and I’d love to get back to regular updates in a few months after my current batch of extra curricular work has concluded.

I’ll keep you all posted either way. I have no intention of abandoning this comic. I love the characters and the little world they inhabit far too much, plus I’ve got enough story ideas for this thing to last me for the rest of my life. I hope you will be able to join us when their journey continues.

Go Ahead, Ask me Anything

It’s been a little over two years since I started doing Jumbo deLuxe comics in the form that they are here.* I’ve been having lots of fun and I hope that you, dear readers, have enjoyed it as much as I have. I’ve learned a lot about cartooning, both in my storytelling and drawing abilities in the last two years, plus I’ve met many amazing and talented new friends, both online and in person, who have provided so much invaluable advice, encouragement, support, and good times. To me this is the greatest reward for making a webcomic. I’m certainly not in it for fame or money, or even trying to get cheap laughs.

What does the future hold for Jumbo deLuxe comics? More of the same, I hope. I just want to keep on drawing these and getting better with my craft so that I can see the ideas in my head looking the way they should on our computer screens. I eventually want to make some sort of book collecting the stories in this webcomic, but that may be quite a while from now. Maybe this time next year, who knows.

I’d like to open up the floor to you, dear readers. Ask me anything about Jumbo deLuxe comics. I have very definite ideas about where things are going with the story, but I’d love to hear your suggestions, comments or ideas on how I could make it better. Are there certain strips which you especially like and would like to see more of their kind? Maybe there are characters you’d like to see more of or less of. Or perhaps you want to know why Emily can talk to with her dog but not the monkey. Whatever, go ahead and use the comments section of this post, or use the contact form elsewhere on this site. I’d love to hear from you.

*Back in the early 2000’s, Jumbo deLuxe was a weird assortment of my half-baked sketchbook doodles which resembled comics, presented through hand-cranked HTML. We’re lucky those days are over, believe me. 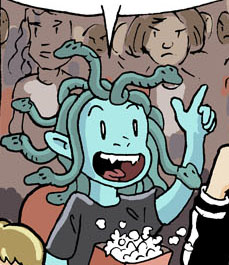 Meet Modest Medusa! My pal Jake draws this wonderful comic strip about his troublesome friendship with a young Medusa. (Yes, that’s her name, and the sort of creature she is.) I recently did this little guest strip for him where they get together for an afternoon at the movies. Modest Medusa updates three times a week when Jake’s not too busy attending conventions, designing games, or doing color for other cartoonists.

It’s a great all-ages comic filled with fun, innocence, adventure, and more than a few hints of naughtiness. Highly recommended. A synopsis image for the whole show

Earlier this week, the folks at Portland Opera invited a bunch of cartoonists and bloggers to attend dress rehearsal for their newest production, with complimentary drinks and food beforehand. I’ve had the pleasure doing this twice before* and each time it’s been great fun. Due to some bad planning on my part and a few mishaps at the hands of Tri-Met, I completely missed the eating and drinking portion of the evening and snuck into the backstage tour at the last minute. I was beginning to feel a lot like Candide myself.

I scribbled like crazy during the rehearsal and returned home with about 9 pages of wildly incoherent pages. On the train ride I came up with a sort of synopsis image of the entire show and added this to my sketchbook. The next day a combed through my favorite doodles, traced them and added a bit of color. I probably would have done more if I had the time. I posted my favorite drawings to my flickr page.

The Portland Opera’s production makes for lively fast-paced entertainment. Anyone who is familiar with Voltaire’s Story and Bernstein’s music will not be disappointed. A bit of background to the story  may be necessary if you don’t  know it. It’s very fast and wickedly funny. Since the action takes place in many locations around the world, the scenery directors have employed some ingenious techniques with projected images, and a stage made of surface like Lego ™ .

Portland Opera have a page which collects all the artists’ work. There were many talented people involved and they have produced some really beautiful work. I’m told a lot of it will be on display in the lobby during the show. Writers / bloggers in attendance posted some delightful and hilarious tweets; you can read them on twitter, tagged  #pdxcandide

*Since 2010 I have attended comic artists’ nights for Hansel and Gretel and Turandot. In addition, I’ve colored some drawings made by my pal S.W. “Conch” Conser who attended an event which I missed.

All Kinds of Fan Art

by Adrian on April 25, 2012 at 9:41 am
Posted In: Blog, Sketch Blog
Here’s some new and ‘classic’ work from Jumbo deLuxe fans. I can’t say how much I love getting this stuff.(click on each image to view larger) 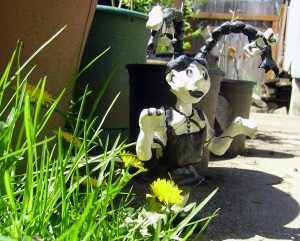 This remarkable 3-D clay sculpture of Emily was made by my good friend Laura Laine 10 or more years ago. She’s using a monochromatic and taller character design based on Emily’s appearances in a student newspaper comic strip that pre-dated the full color webcomics we all know today. 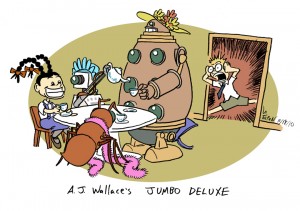 Neal Skorpen is a webcomics veteran, mentor and longtime pal. He’s probably best known for his comic strips Introvert Manifesto, Muddlemarch, and graphic novels Island of the Moths, and his latest project, Æthernaut. Here he’s drawn the usual suspects having tea and getting all ladylike. 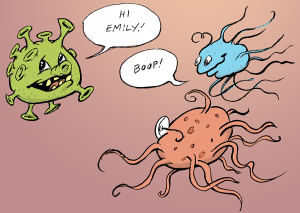 Another longtime pal S.W. “Conch” Conser apparently likes the Yogurt Cultures. I haven’t got the heart to tell him that I have no plans to use them in any future comic strips. You can hear S.W. “Conch” Conser on KBOO radio where he interviews the hell out of the world’s finest cartoonists and animators.

In an earlier post, I shared this lovely fan art made by Ken Koral.

Don’t Look at Me